My Family and Other Animals

I've been thinking a lot about design for children recently, not least because of the story that I heard behind this bookshelf, which I saw at Cassina during the London Design Festival (I'd gone in to look at some photographs that Karl Lagerfeld took - seriously, he gets everywhere, does Karl.  I'm beginning to wonder if he's delegated sleep.  I don't otherwise understand how he achieves all that he does.)

It's beautiful, isn't it?  It reminds me of a suspension bridge, and I love suspension bridges, which is why one of Sholto's middle names is Isambard.  (I'm not alone in this love, incidentally:  my father famously climbed Clifton suspension bridge the night before his wedding.  My mother tells me she was 'jolly cross' when she found out . . . I digress.)  When Albini first designed the Valiero, each shelf was a single piece of glass, and, among other things, the stereo lived on one of them.  Until the night his son had a party, pumped up the volume, and the ensuing vibrations caused every shelf to shatter.  Now, each shelf consists of two pieces of glass, glued together.  So it's now stereo friendly, but still, regardless of whether or not I had a spare £36,000 lying around, I wouldn't order this amazing piece of design at the moment, as I don't think it's particularly child (read, Sholto) friendly.  There's movement, you see, each shelf can be pushed to make it oscillate ever so slightly.  It's part of the joy of the piece, but I have no doubt that Sholto would want to experience that joy on a very regular basis, which, longterm, would be irritating at best.

But there's plenty of design that is child friendly, and I may continue this theme another time.  For now I want to talk about fabrics and wallpapers and such like that appeal to children, because I'm a tiny bit obsessed, and because I took Esmeralda to Decorex with me (which was faintly accidental but in the end not a disaster) and she made a beeline for anything with birds or animals on it.

Which is something that I love too, and why I was delighted to discover one particular stand at Decorex, which was exhibiting china, wallpaper, and some of Patrick Mavros's wonderful safari-esque silver creations (which Wills and Kate are apparently big fans of.  According to no lesser source than The Daily Mail, their wedding list was full of it.)

First up, the china, which is by Alice Peto.  (I've written about her before, here and here): 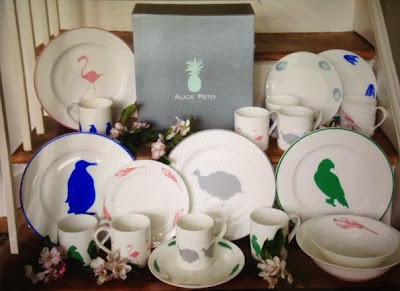 It's made in Stoke-on-Trent, and is 100% dishwasher proof (not that we have a dishwasher, but we will in the next house, for sure.)  I love it.  All of it. It also answers all my Christmas present issues (to my family:  state your preferences soon.)  I veer between loving the flamingos the most, and loving the parrots the most, and I think that the only answer will be to pray that somebody gives me the whole lot, and a Welsh dresser to store it in and on.  (Sholto would love it too, especially the penguins.  And it's a long time since he broke anything, so I would trust him with it.)

The wallpaper is by Juliet Travers, and is pretty much as close as you can get to being on safari (coincidentally the name of this collection) in your home, especially if one were then to load up with Patrick Mavros silver animals.  There are elephants and gazelles too, but I'm very into birds at the moment, so here are flamingos again, and guinea fowl (see, it works perfectly with Alice's china!) 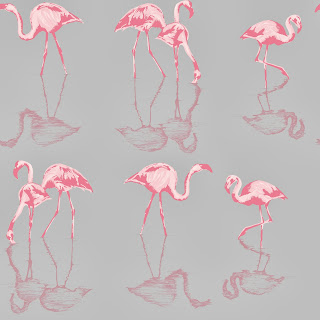 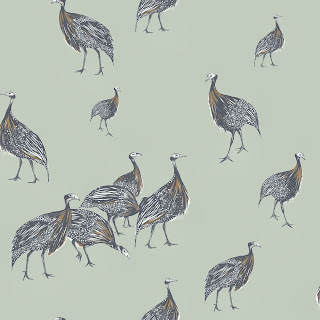 And then, then, just imagine if you upholstered a sofa in this: 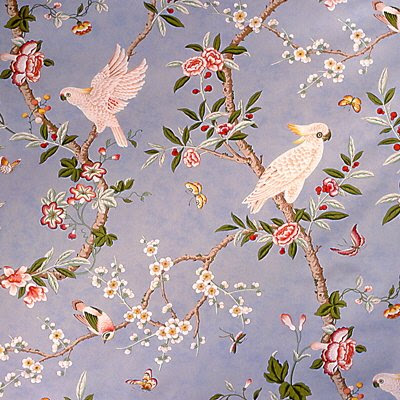 Brunschwig & Fils, Kanchou in Wave (it's both a wallpaper and a fabric)

Which also goes pretty well with Alice's china.  And the children would love all of it.  (Much more than ikats and paisleys, it transpires . . .)

Email ThisBlogThis!Share to TwitterShare to FacebookShare to Pinterest
Newer Post Older Post Home
"The fly is for us a symbol of freedom. She can go anywhere, be everywhere and we don't even notice her presence, because she is so insignificant. Even in a totalitarian state, where everybody's life and movements can be limited and controlled, the fly is free."
Emilia Kabakov